The usual intro to REA focuses on the Exchange pattern, where two Agents trade Resources with each other.

But there is another REA pattern, which ValueFlows calls Process and which might be called Conversion or Transformation in other REA references.

For example, here is a Process to create a 3D printed part: 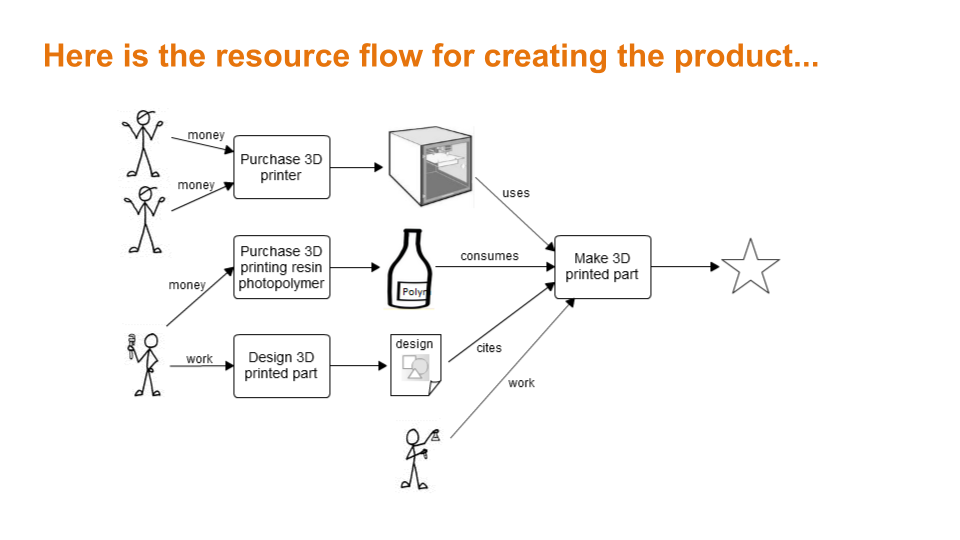 This was simplified from a real Sensorica process. The cartoon follows some of the inputs to the process back to where they came from. For example, the 3D Printer was purchased via donations from 15 community members, as you can see in the "Where From" information on its Resource page.

The general pattern for a Process is simple:

where each Event has a providing Agent and a receiving Agent.

Usually the receiver of the output Resources is a group Agent that the providing Agents of the inputs are related to. But in those cases, there are implied claims from the providers of the inputs to the receiver of the outputs. In Sensorica, those claims are handled by Value Equations that govern how income gets distributed to contributors to the creation of whatever brought the income.

Here you can see screenprints from the real Sensorica Process in context.

There are other Process patterns, for example where the same resource goes into and comes out of a Process. This could happen when something is repaired or created in stages; or when something is transported. Some additional Event Actions:

Here is a story about pie (yum!) that gives a longer and more complete example, including doing, planning, and a recipe. It also includes Exchanges and Processes.